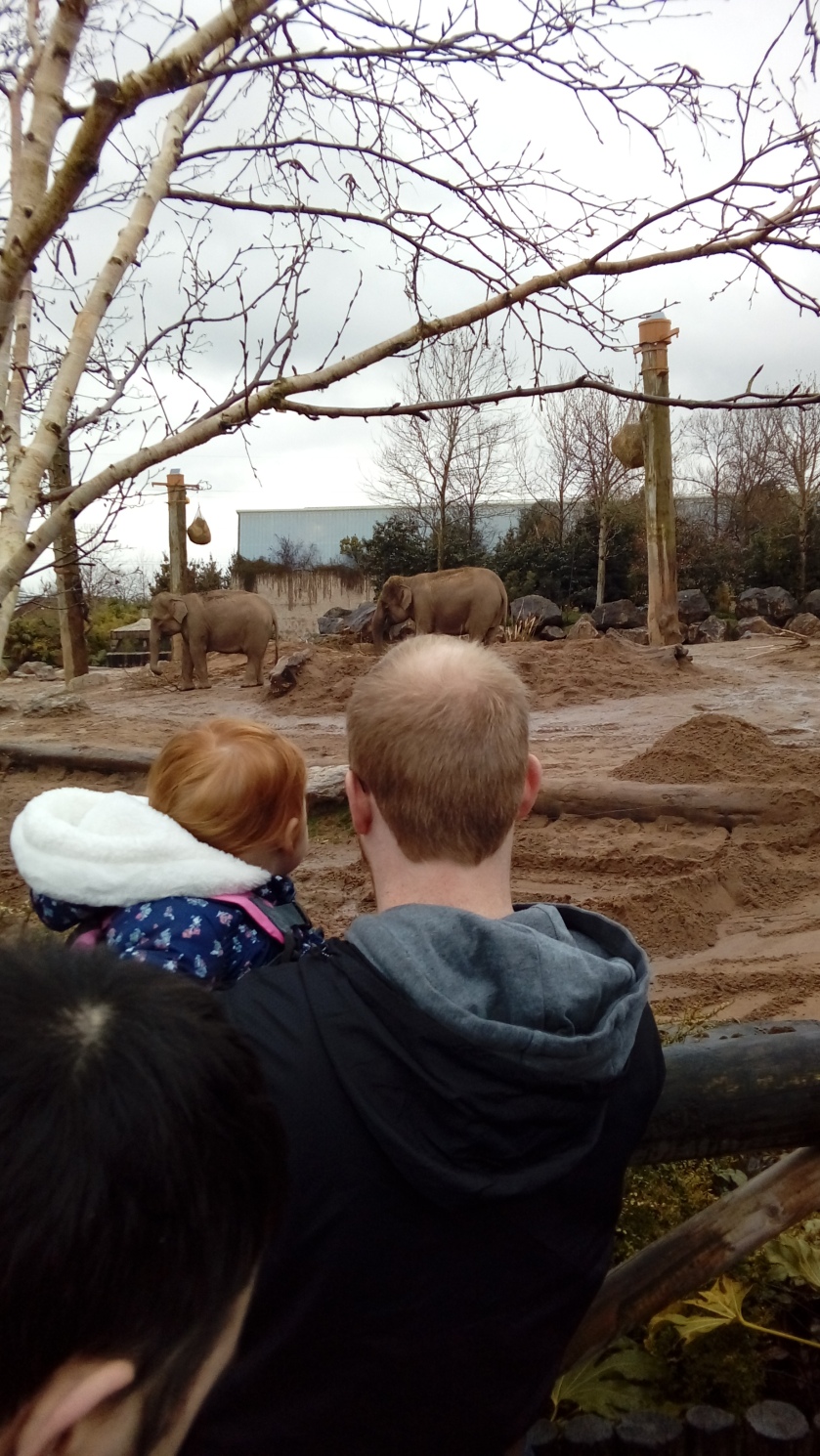 On Tuesday we took a drive out to Chester Zoo, it’s just over an hours drive from Telford and we had pre-booked our tickets the night before. Tickets purchased online are actually cheaper than paying when you get there and can be purchased right up until 9:30 the morning you are planning your trip which I thought was pretty good. We had asked both our brothers if they wanted to come too so spent the day with them which Ellie loved. With my brother having Down Syndrome it also meant that as his carer for the day I got in for free (which we then halved the price of the ticket so he didn’t pay full adult), as a family with a disabled member I find it makes me want to visit more places when they allow for the carer or a discounted price for those with the special needs. I thought as his DS isn’t as obvious as others we might get questioned but they let us through without any hassle.

I have to say that for the entire journey it rained…no it didn’t rain it poured! I was seriously considering going home and wasting the money we had spent because the weather was so bad but knowing we had planned for bad weather and packed accordingly we knew the weather wasn’t going to stop us from enjoying Ellie’s first trip to the zoo.
Due to the weather and timing we were able to park on the main car park, which is FREE! I’d forgotten to bring any change with me so was grateful when we realised we didn’t need change for parking. We loaded up Ellie’s pushchair and made our way to the entrance, there was no need to queue as we’d already got our tickets so we went straight through, it didn’t seem to be very busy but i’m guessing that was because of the weather however it did stop raining and although it was dull, we were dry! The Zoo hires out buggy’s and other mobility services (wheelchairs being free too!) which if we hadn’t have taken our own we’d have needed as Ellie decided to nap half way through the day but after all the walking she did I’m not surprised! 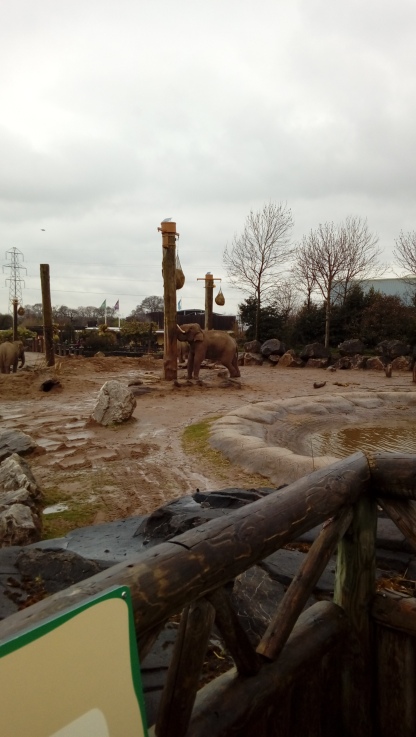 Chester Zoo has such a special place in my heart, we go there at least once a year and I’ve been with a Jason bump and an Ellie bump which I guess is why I feel such a family connection whenever we go.

We were provided with a map (which I can never quite get my head around) and downloaded the free app to help us find our way. I found the app so useful as it had an interactive map that showed you where you are in the park at any time, it also had all the daily activities listed such as animals talks which if Ellie had been older we may have listened in on.

This was a great test to Ellie’s Tresspass Reins (click for my review) and they meant she was able to walk without us worrying about her wondering off. I must say taking a 17 month old to the Zoo was a tall order but the zoo is so spacious and well planned out that it didn’t feel overwhelming at all. I was a little bit worried that we were wasting our money on a day trip just for Ellie to see the animals but as she is so inquisitive she was quite happy just looking at the animals and walking was enough to make her happy. 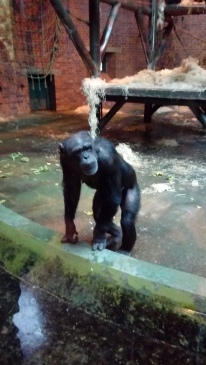 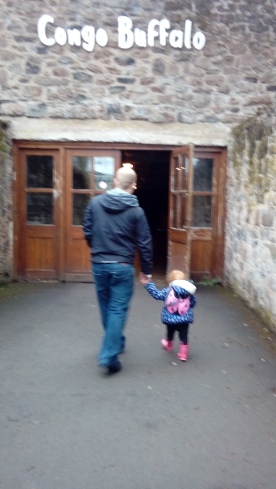 We took our time visiting the animals and got to see all the ones we wanted to. At busier times certain animals were harder to see because of people crowding (the red ape realm, jaguar enclosure being the worst for getting a toddler to a window to see). Our first stop of the day was the elephants, I love their enclosure and since Jason died I have linked elephants (Dumbo in particular) to him so they were my favourite part of the day by far! 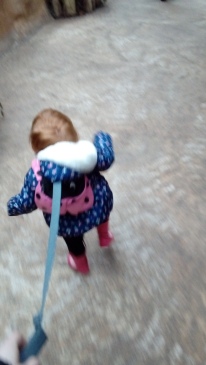 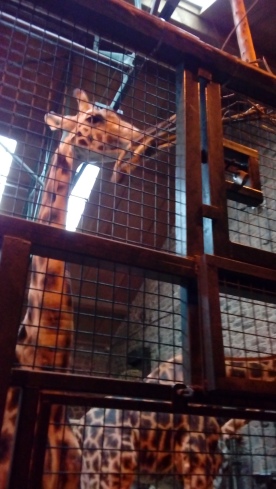 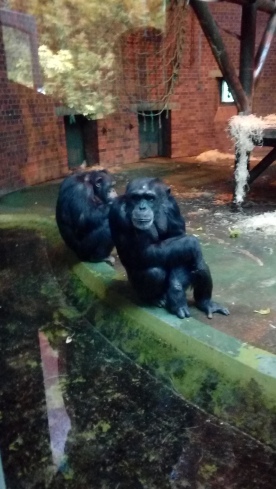 We saw one elephant feeding and a few baby elephants too which made my heart feel so much love. (Disclosure – I am not an animal person, I don’t want pets, I’m not keen on dogs and I don’t watch David Attenborough because I find him boring so to feel so much love for an elephant baffles me but I did.) We strolled off to find some other animals and was excited to show Ellie her favourite animal “Ra-Ra” that is a lion to you and me. I don’t think Ellie had realised that the lions were RaRa as she was more interested in the giant puddle near the lion enclosure and spent a good few minutes stomping and getting wet in the puddle. While walking around we encouraged Ellie to look at the animals we thought she might recognise and made the noises to help her associate them with her books and little toys.

I love that you can take your own picnic in to the Zoo, which for us meant it would be a much cheaper day out and I could pack Ellie’s lunch with her favourite fruit pouches and snacks. We were planning on buying ice creams but it was far too cold and now I regret it! There were plenty of places to buy food and drinks from dotted all over the park with quite a large variety too however as you could expect it wasn’t cheap, a small tray of chips and curry sauce was £2.50 where as it was around £7-£9 for a meal.

I was a bit nervous at having to change Ellie in public, we tend to avoid it as much as possible as she hates getting her nappy changed; however I was pleasantly surprised to find that not only was there plenty of baby changing facilities but they were in both male and female toilets! They were clean and spacious and made the change much easier…even if Ellie did cry throughout the whole thing and the other Mum’s in the toilet area gave me a look as we toddled out with tears down her face. 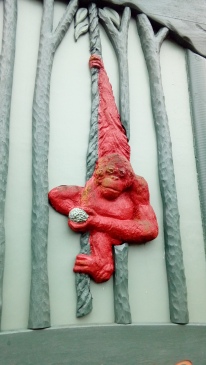 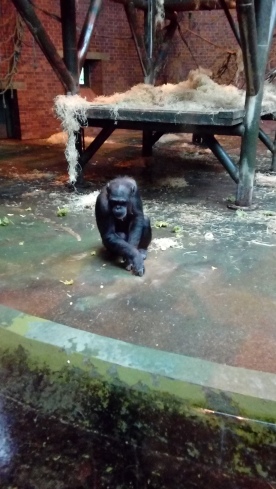 We eventually saw the Giraffes and the Congo Buffalos which I think were Ellie’s favourite animals of the day, I’m not sure why but she kept dragging us back to them. I loved the Orangutan and the monkeys and were so lucky that two came up close to the window and Ellie was able to get a good look at them. However, as mentioned before, the Red Ape Realm was quite busy so we didn’t get a great look at the Apes in there but that was to be expected.

Hubby was feeling brave and wanted to take Ellie in to the Fruit Bat Cave, as my brother is petrified I decided to stay with him while Hubby and my brother-in-law took her in. I was expecting them to come straight back out because she was screaming yet they took their time and Hubby says Ellie was constantly looking around. He did say it wasn’t as dark as it normally feels so they were able to see the bats a bit more clearly which I think helped. I still don’t think we’d have got my brother to walk through though! 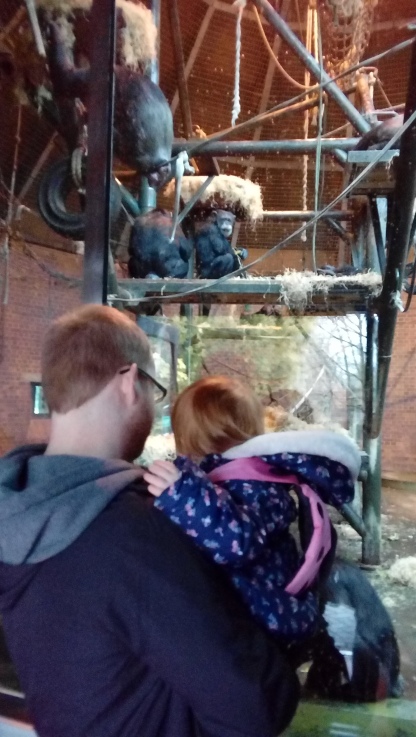 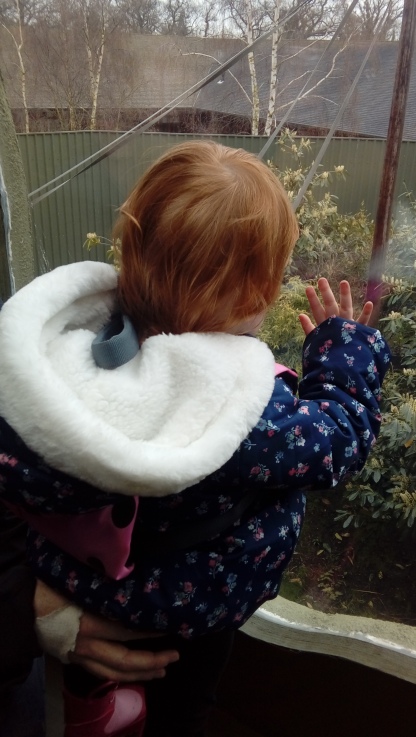 Due to Ellie walking for most of the day we didn’t get to visit the whole 110 acres and I think in hindsight we could have used the Zoo’s monorail to get around more of the animals. There is also a water boat ride but Ellie’s not quite old enough for that yet so thought we’d give it a miss this time. I do wish we’d have gotten over to the Islands part as I think she would have loved the animals there but we will do that part first next time!

The whole day was mesmerising, from the moment we got there Ellie was so happy to be out in the fresh air, splashing in the puddles and conning Daddy out of money at the gift shop (already!! We spent £30 in there!) I was slightly disappointed that we couldn’t find the Dinosaur exhibit that we saw when I was pregnant with Ellie but we could tell there was lots going on to make the park ready for the Summer and I’m expecting we will be going back in the 6 week holidays for another visit! The sheer amount of animals you could see is enough to go back, from elephants and lions to sloth, bats and butterflies! There really is something for everyone and if the walking doesn’t tire the little ones then the play areas certainly will. I’d have loved to have let Ellie have a wander but they were busy with much older children and I was scared she’d get squashed!

Overall we had a lovely family day, making memories and although the admission price was still pricey (£21 each!) with the Carer being free and Ellie being under 2 we all got in for £43 which really wasn’t that bad! I would recommend it to anyone wanting to visit a clean and family friendly zoo.